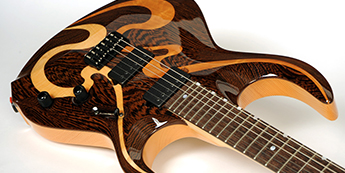 Just a quick note to giving you an update on my new Conklin custom guitar Sidewinder II.

Here are the photos of my gorgeous new Conklin hollowbody guitar, it’s completely ready to be packed up and shipped to me in N.Y.

I really consider myself fortunate to have the opportunity to play an instrument like this.

The guitar also has the D-Tuner and great Di Marzio Pick-ups. You will be able to see an HD documentary on Video Guitar Education TV soon.

Bill’s love of the guitar was sparked at about age 12 when his best friend got a guitar for Christmas. Within a few months Bill decided to pick up a bass to accompany his friend on guitar. It began with simple three chord melodies, but the love of guitars and making music would be deeply instilled for a lifetime.

Before long, Bill began to design radical guitar bodystyles and had soon filled an entire drawing tablet with innovative and imaginative designs. In his senior year of high school Bill went so far as to build his own one-of-a-kind guitar. Bill received so much interest and attention when he played the guitar live that he decided to turn his passion into a business. Just three years out of high school Bill started Conklin Guitars.

Early on, Bill relied on repair work to supplement the business income while honing his skills on modifications and refinishing, refretting, tremolo and pickup installations and custom inlay work. In 1988, Bill married his sweetheart of 7 years (Michele), moved to Springfield, Missouri, set up a brand new shop and concentrated solely on building his own original line of Conklin instruments. In just six short years Bill and his partner (Phil Goschy) had completely outgrown the original Springfield location and were forced to build the larger shop that the company calls home today.

In 2001, Bill’s longtime sidekick decided to leave the guitar-building business to become a full time dad. Just by luck, one of Bill’s local customers knew of a young guitar prodigy named Mike Apperson who had been following the progress of the growing company and was interested in doing guitar set-ups. Little did either one of them know at the time what would soon become of their association.